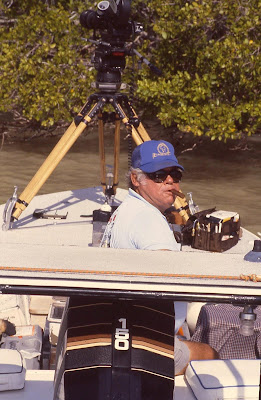 I suppose that Cecil will ever be associated, among other things, with the pocket at Buchanan Bank. His ashes, as did his presence, will haunt tarpon there forever as they migrate north.
As I remember Cecil, I can’t help recall a steamy June morning as I launched my skiff at the Toll Gate ramp on Long Key. I was with my fishing companion Dave Vatter, and the only thing looming in our combined consciousness was the summer migration of tarpon. The stern of the skiff slipped off the trailer into the oily, slick calm of the boat basin….the ripples shattering the reflection of star shine. The in-line six cylinder Mercury roared to life, clicked into gear and the bow came north toward the point of Buchanan Bank.
Beating Cecil Keith to the Pocket was no small feat in those times. He seemed to grow out of the marl there. If the little hand of your watch was past five A. M. you had little chance! As I came along the east side of the point and glanced at my watch, I thought…..You’ll be in the second spot today Cecil.
I rolled the skiff hard west through the cut south of the Pocket and looked toward the north horizon…No sign of Cecil. It was the top of the tide and we’d have falling water in the Pocket till after mid-day. PERFECT!!!!!!!
I eased off plane, poled across the bank, staked down in the Pocket and breathed a sigh of relief. Dave and I were in the Cat Bird Seat till after noon and then some.
Dave and I broke out breakfast, opened the thermos of coffee and talked of things Fishical until the glow of sunrise fulminated up to the east. Fish could come along at any moment.
I reached up to my throat where my Polaroid sunglasses should have resided…..they were not there. They had missed the boat ride. I knew in a flash that they lay on the dash of the pickup back at Toll Gate. The prospect of a day on the shimmering flats, without sunglasses, was unthinkable!
A Coast Guard quality drug search of the boat failed to reveal a spare pair of glasses (a lesson carried long into the future). Three things were certain…the sun was most certainly rising, I had no sunglasses, and finally, Cecil Keith was coming very soon to claim the Pocket!
A plan developed. Dave would ease overboard and stand in the Pocket, guarding our spot with a spinning rod as I fogged it back to Toll Gate to fetch the glasses. Off I went as the sun hour-glassed up over the horizon.
Dave must have wondered as he stood in the waist deep Pocket…what about birds looking for a place to roost? What about crabs, sharks, stingrays? My thoughts were of nothing but sunglasses. Tarpon still occupied some distant folder on my hard-drive, but it was that pair of Polaroid’s that guided my course back to Toll Gate. Round trip from the Pocket to Toll Gate took most of thirty-five minutes on a high plane at sunrise.
It was the custom in those times, as today, for the first arrival to Buchanan bank to occupy the Pocket. Later arrivals lined up behind the Pocket along the bank at intervals averaging 30 yards between skiffs. As I arrived back at the bank and peered toward the pocket, I could see Dave standing waist deep in the pocket. Thirty yards behind him was Cecil’s skiff. Behind Cecil, incrementally, were three or four
other skiffs, the occupants of which were peering into the rising sun hoping to catch a glimpse of a rolling tarpon approaching the Pocket….none concerned that the person occupying the Pocket was four miles from the hard road and without a skiff.
I idled in to the south edge of the bank, poled across, picked up Dave and then staked down once again in the prime spot. Cecil never said a word. It was as though such antics occurred every day.
Another guide might have protested, but Cecil, ever confident in his ability to find fish for his anglers, never uttered a protest. Another lesson that I endeavored to carry long into the future.
I’m hopeful that I’ve done so!

Thanks as always for reading and please stay tuned for more.....much more!!!!!